16th March 2019 marked the day of Projek Dialog’s second instalment of Pesta Filem Kita 2. Boasting a reputation of showcasing films which illustrate the Malaysian experience and lifestyle, it aims to bring people together through films as an important cultural medium.

This event was proudly supported by the United States Agency for International Development (USAID), the US Embassy in Malaysia, and Malaysians 4 Malaysia. After close consideration of multiple factors, this 10-hour long event is decidedly held in RUANG by Think City, which is right in the heart of KL, surrounded by an area best known for KL’s rich, traditional and modern culture. Apart of its accessibility granted for our guests, a closed-off event space is able to provide a privatized atmosphere, definitely suitable for enjoying movies!

The preparations for this event were undergone for about three months. Spearheaded by the curators: Victoria Cheng, Muzzamer Rahman, and Fuad Rahmat, they are able to ensure the success and smooth-running of the festival.

During its promotional stage, it garnered a lot of attention and positive responses from the public, especially on social media platforms such as: Facebook, Twitter, and Instagram are able to showcase incredible statistics. This time period is crucial for the success of the event, as it is important to spread the word!

The event space is effectively utilized by splitting it into sections: a large screen with a raised platform for screenings and speeches served as the room’s centrepiece, bamboo mats and beanbag chairs strewed across it for a fun and casual movie-going experience, while higher chairs lined tidily beyond them up until the back of the room.

Beside the stage featured a large poster board of the events’ logo: a plate of nasi lemak – which is Malaysia’s most famous delicacy – shared among people of different races – which is exemplified by the skin tones and cultural characteristics of their hands, serving as a designated space for taking pictures.

Posters and buntings about the event’s information lined the walls, accompanied by large cardboard cubes with the filmmakers’ profile stacked together, and the filmmakers definitely enjoyed them, as most of the filmmakers took the cubes of themselves home! Furthermore, a plasma television was set up to showcase films from the last ‘Pesta Filem Kita’, which was held in 2016.

Book vendors ran their businesses with their stalls set up next to the buntings, while the registration and free goodies table was placed by the entrance to make a guest count and hand out free t-shirts and laptop stickers.

Pesta Filem Kita 2 kicked off with ‘Malaysians 4 Malaysia Short Video Contest’ open to Malaysian students with a top cash prize of RM 2,000. The theme of the contest was ‘The Hopes for the Youth for a New Malaysia’, which is importantly relevant to the current state of our country with its recent government change and youths being next in line to shape its future. The contest had gathered more than 30 applicants, and it was narrowed down to 9 finalists after meticulous consideration. The finalists are as followed:

After a screening of videos which showcase the title through diverse perspectives, it is evident that the youths of Malaysia possess immense potential to be not only filmmakers, but future leaders who pledge patriotism and love for the diversity in our country. Then, a short interview and Q&A session were held with the[U1]  young filmmakers, conducted by the event’s emcee – Sadiq.

And finally, the winners were announced based on a collective decision by our esteemed curators, Victoria Cheng, Muzzamer Rahman, and Fuad Rahmat, who were also the judges for this contest:

Additionally, Butang Hukum also swept up Audience Choice Award, as decided by the guests through an online poll, determining it as the popular crowd favourite. A speech was given by Yana Rizal to congratulate the contestants for their dedication and creative endeavours. The contest ended at 1pm as the winners went home with prize money and certificates as a proof of their provision.

At the same time, registrations were made throughout the duration of the event, and the statistics gathered were very impressionable and proved the event to be successful: more than 300 guests, consisted of mostly Malaysian youths attended. After the guests have successfully registered, event-themed t-shirts and laptop stickers (sponsored by Malaysians 4 Malaysia) were handed out as complimentary gifts to guests, the gifts proved to be popular as they sported a simple yet meaningful design and was widely demanded.

Later in the afternoon, two workshops aimed to spread knowledge about filmmaking were conducted from 1.30pm to 3.30pm. The first workshop was led by Dr Khairul Fazi, lecturing the finer points on the topic ‘Documentaries: The Bold New Cinéma Vérité’, reflecting on the documentary style as a prevalent filmmaking technique.

The second workshop was conducted by Joshua Michael, explaining and elaborating on the topic ‘New Media, New Malaysia’, thus commenting on the media landscape in the current political and systematic climate. Waves of people filled the seats, eager to get a fill of filmmaking knowledge.

The Evening GALA began on 5.30pm with a light-hearted cocktail reception to break the ice. The buffet table was crammed with neatly-arranged finger-sandwiches, spaghetti Bolognese cups, kuih muih and beverages, as the guests mingled about and socialized.

As the crowds settled down for the screening, the highly-respected YB Fahmi Fadzil – who is the member of Parliament for Lembah Pantai – was given the honour to give an opening speech, stressing the importance of filmmaking as an art form and its power within Malaysian culture.

The first session of the screening started off with 160 Juta (Directed by: Ashrafiqal Aleef), featuring a strong female lead to defend her village against an exploitive person in power, but what makes it stood out was its western cowboy film inspired style, merging with and also contrasting against traditional Malay kampung culture.

Aku Dan Roxane (Directed by: Mohammad Fais Hafiz) was up next, leaving the audience to ponder the deeper meanings of ‘chaos’ in the city life of KL through its avant-garde editing, characters’ complex emotional space and stunning visuals of sombre, city neon lights.

And finally, Rumah Tidak Bertanah (Directed by: Putri Purnama Sugua) served as an ending to the first session, following the story of an undocumented child in Sabah, living in extreme poverty, striving to receive education and finally being separated from his parent as he ran from the police, accurately representing a current issue in Sabah.

Afterwards, a Q&A session (led by Victoria Cheng) was held with the three filmmakers in order to give us a glimpse into the effort behind their productions.

The second session was held after a 30-minute prayer break. It began with Keretapi Ke Pangi (Directed by: Mohamad Yusof B. Sadjirin), illustrating the sentimental bonds between family members and their simple lives in a rural area, most particularly between a father and his son, their relationship was magnified during the father’s accident which requires the son to rush him to a faraway hospital as there aren’t any trains available.

Next up, Khilaf (Directed by: Khairi Asyraff & Produced by: Rais Aqil) effectively portrayed the political issue of child marriage and contradictory religious values through the story of a single father and his daughter being manipulated by a close friend into marrying his daughter after raping her, leaving the audience at the edge of their seats.

Ninavau (Directed by: Bebbra Mailin) narrates a common cultural problem between Islam and Christianity through Ninavau, who came from a Christian household, converting to Islam and face familial and societal pressures to freely follow her religion.

Malaysian Like Me (Directed by: Cech Adrea) is a documentary emphasizing on the lives through light-hearted banter between characters, showcasing a specific Malaysian-style of friendliness and humour that surrounds the relationship between us.

A second Q&A session (led by Muzzamer Rahman) was held with the remaining filmmakers to understand more about their films.

Each films were then considered by a diverse panel of judges: Nova Goh – a documentary filmmaker, Redza Minhat – an actor and a scriptwriter, Indrani Kopal – a filmmaker, and Dr Wan Aida Wan Yahaya – an academic and a scriptwriter. Before the announcement of winners, speeches were given by each judge, along with the events’ curators to give their acknowledgements.

Finally, the winners of each category were announced after a decision was made:

On the other hand, the audience were making their own decisions as well, as they decided on their favourites through an online poll. As a result, the Audience Choice Award winner is: 160 Juta, which features an interesting mash up between western culture and Malaysian culture, and an aesthetic of surreal golden-hour sunlight and dreamy ocean blue moonlight.

The award giving ceremony marked the end of Pesta Filem Kita 2. Overall, it managed to exceed the target of 300 visitors and welcomed more participation from the youths of Malaysia. Therefore, this event reserved a lot of potential for Projek Dialog, as we will definitely look forward to Pesta Filem Kita 3! 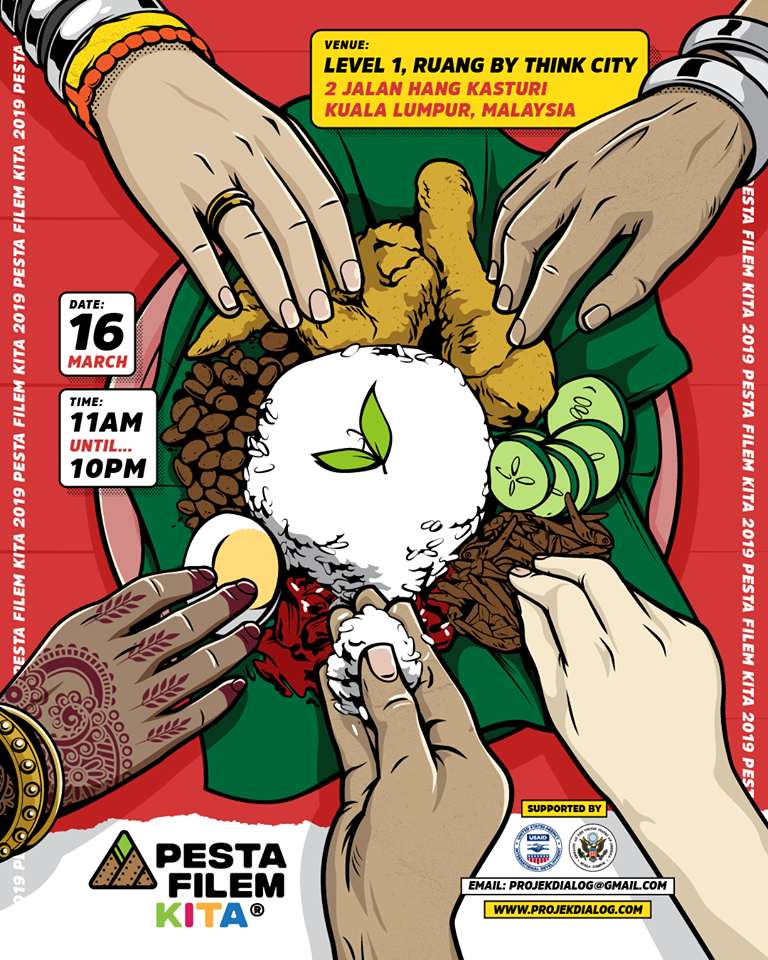