#MilkTeaAlliance began a year ago when Thai actor Vachirawit Chivaree posted that Hong Kong was a country in an offhanded manner. It resulted, as expected, with uproar from netizens and attacked an old post by Chivaree’s girlfriend who stated that Taiwan was a country as well. However, Thai netizens defended their actions an all-out keyboard war erupted between the “wumao” or the 50 Cent Party versus Thai, Hong Kong and Taiwanese netizens. To show solidarity between the three, they celebrated their shared love of milk tea beverages that many Southeast Asian cultures have as well, inviting them to join in. And just like that milk tea became the anti-CCP symbol.

Soon after, protests in Thailand, Belarus, India, Indonesia, the Philippines and most recently, Myanmar would signal their “membership” into the alliance. Through this hashtag, they share highly detailed protest tactics and organizing strategies among one another. Not to mention, protest swapping slogans wherein Thai netizens shared pro-democracy material on Hong Kong, evading the National Security law while Hong Kongers shared Thailand’s anti-monarchy material to evade lèse majesté restrictions. Chivaree, who later apologised to the Chinese government, had unknowingly sparked wider solidarity in the Southeast Asian region particularly against not only their own entrenched strongmen and political elite, but also against increasing Chinese influence.

But this is not an article about the people who have already joined the Milk Tea Alliance, but ones that have not. Emergency decrees have been enacted in Philippines, Thailand, Myanmar and Malaysia under the guise of curbing the spread of the COVID-19 pandemic, but everyone knows too well the reality is but to usurp power and suspend parliament. However, Malaysia continues to remain quiet. We could make arguments that the issue is not as pressing in Malaysia unlike in the other countries where protests were sparked, which some take as an opportunity to prop up Malaysia for “not being as bad”. Although, looking down on others can be a way to make oneself feel better about being from a country that had one of the biggest corruption scandals in the world and a current backdoor government that will remain unchallenged until August 2021.

An overwhelming feature of mass protests in Thailand, Indonesia, the Philippines and Myanmar is how inclusive they have been. The protests in Myanmar feature many remorseful on their silence on the Rohingya genocide and openly working with the communities in protest meanwhile Pattani students have demonstrated alongside other Thai students as well. In Hong Kong, domestic workers and ethnic minorities have played a significant role and sparked discussions on widening the Hong Kong identity and some have decided to run for the Legco seats. The mass protests were able to build solidarity within the cracks of their own society before relating to the struggle of others, all declaring support for the plight of the Uyghur, Tibet, Hong Kong and Taiwanese people. 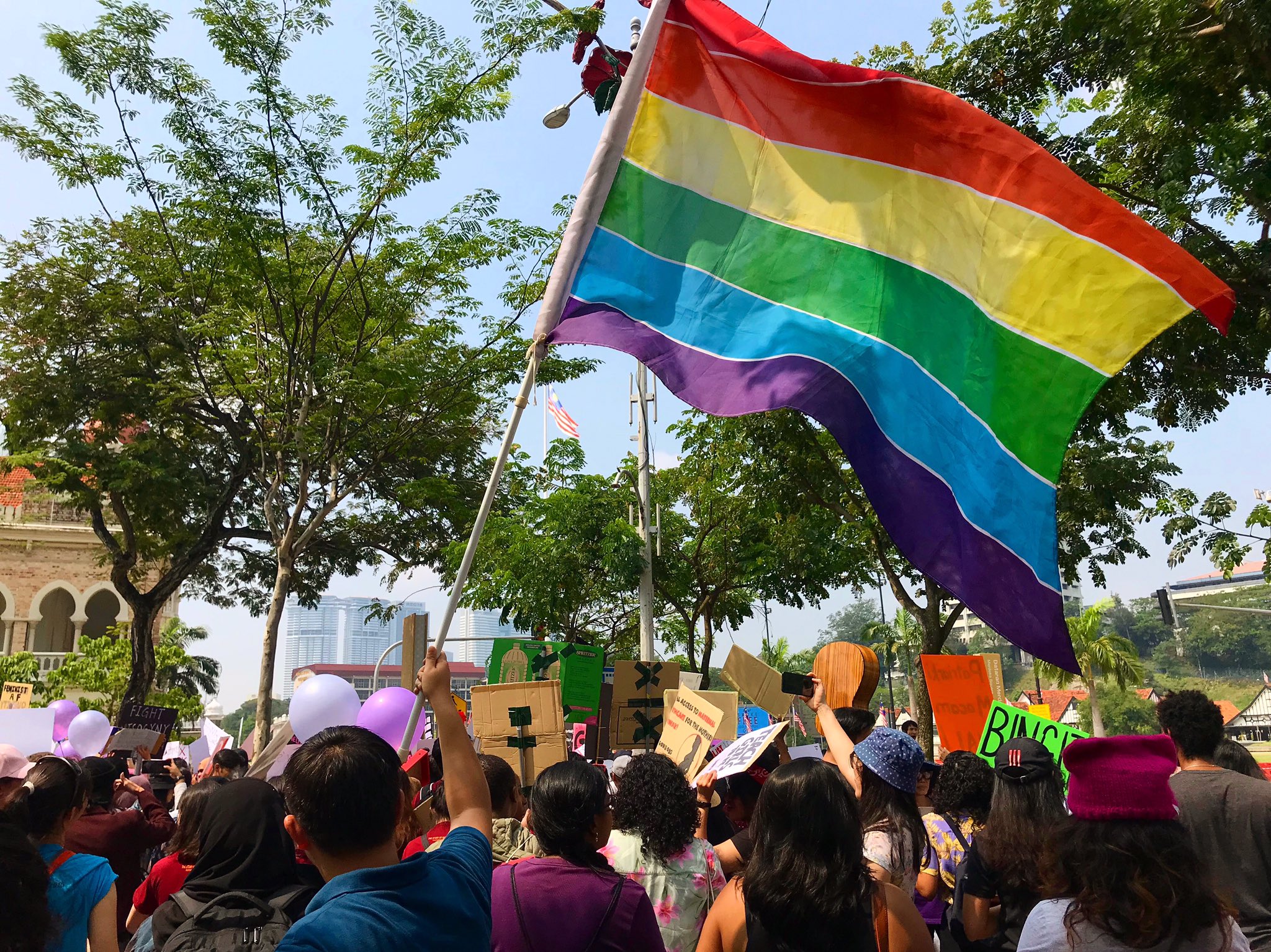 The protests in Indonesia, Thailand, Hong Kong and Myanmar have spread nation-wide, proudly featuring people from all walks of life, such as the ethnic minorities, the LGBTQ community, spiritual healers, religious leaders, blue-collared workers, doctors, civil servants, and times even the police. The issue of LGBTQ communities joining demonstrations in Malaysia never fail to make headlines from the Women’s Annual march or Bersih rallies. Migrant workers and refugees are targeted for “meddling” in the election, leaving many in fear of protests as the “democratic” process only enlarged the targets on their back. When Rohingyas in Malaysia protested against Myanmar’s military violence in Rakhine state, many were quick to dismiss them and asked them to get back to work eventhough just a year before Najib Razak had led a rally against the persecution of Rohingya Muslims amidst the 1MDB scandal.

Rallies in Malaysia have remained divided not only by race but also restricted by racialized understandings of class typically personified by the “rich Chinese vs poor Bumiputera”: “that Chinese are rich and non-Chinese are poor; second, poor Muslims are more easily prompted to embrace religious intolerance” [1]. Mass protests in Malaysia have hardly mobilized only based on economic precarity as they continue to be couched under racial divides, which tend to feature “competition among the middle classes”[1]. There is but little effort to mobilize alongside trade and labour unions. Even the latest J&T workers’ strike was met with so much backlash from the public. A video of the workers throwing packages angered customers, leading many to respond by showing their defective products that arrived. Others were also quick to put the workers down for not making complaints to relevant authorities instead of resorting to a strike, rather than showing support that they deserved more than the poor working conditions they were striking against [2].

Last but not least, mass protests still center greatly around political personalities, only deriving their legitimacy through the number of politicians—have held high positions in government—who come to protests. Be it, the spectre of Anwar’s black eye for Reformasi, Mahathir Mohammad at the Bersih 5 or Abdul Hadi Awang at anti-ICERD rally, protests have yet to transcend beyond party establishment and political persona. One can go as far as to say the pull of mass protests continues to be led by whoever has become the opposition party in parliament. Eventhough the protests in Thailand had begun with the disqualification of the Future Forward Party, they have transcended Thanathorn Juangroongruangkit, calling for the reforming of 112 lèse majesté laws, the Thai monarchy and for fair elections.

Unable to be inclusive towards minority communities, trade and labour unions and to undo racialized myths of class, mass protests continue to be shaped and based on political elites. That is not to say there have not been demonstrations that have transcended these problems. There have been plenty from May Day protests to Tangkap MO1 rally but they continue to be seen as unlawful and violent instead of being an important part of a democratic process. As we are unable to unite even in negation of widespread corruption and illegitimate power-grabbing—given the deep divisions in our society that we continue to uphold—one can only be an exemplar warning to our neighbours. To be able to build solidarity across race, class and other diverse minority identities within, then only will we be able to build solidarity with others in the Milk Tea Alliance.