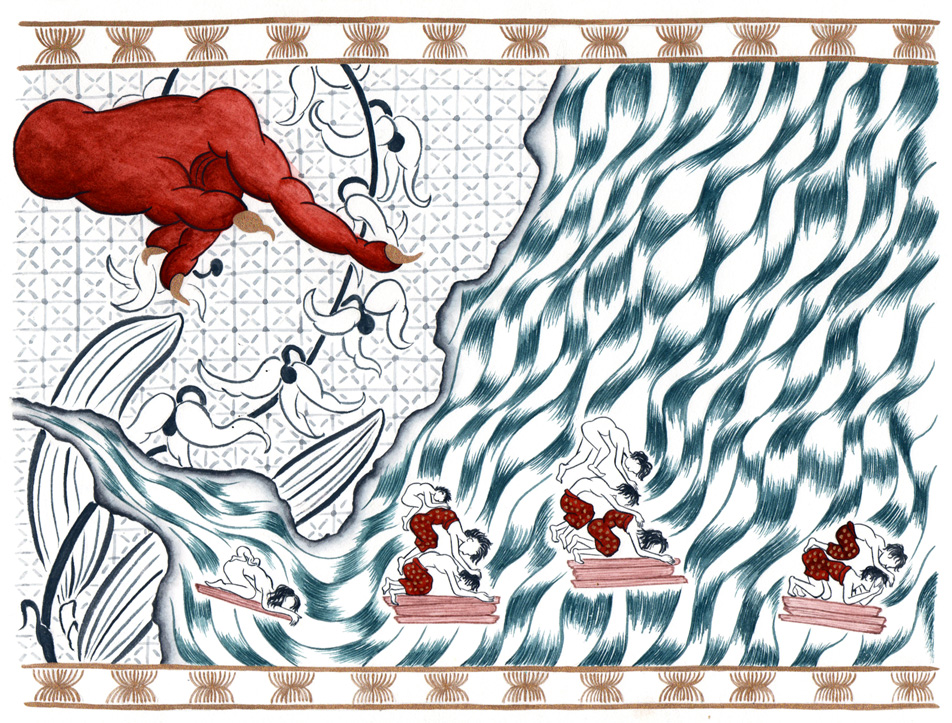 Illustrations by Sharon Chin[/caption] Whalebone & Crabshell by Zedeck Siew This is how our land is laid: Firstly, the domains of the Sultan — may God ever extend his years — the groves and fertile paddy-lands; the ports and isles and cities, where spice is sold and timber traded; mosques full of devotees; loyal citizens talking in civilised tongues. O our Sultan, may he reign safe upon the throne! And then, the sea, full of bounty — but also of pirates, submerged giants, ghosts of wind and water; playground of the Lordly Dragon, and the great spirit Root-of-Creation, who lives in the navel of the ocean — O grand Mother Ocean, who is female, therefore occasionally chained but never tamed. And then there are the inlands and the uplands: in the jungle interior, upriver, full of hidden primates and uncivilised peoples. Indeed, to be an inlander is to live lawlessly, as a fugitive from the Sultan’s justice — and uplanders are all revolutionaries and deviants anyway; they practice schismatic rites and prostrate themselves before idols. O God save us! ~ Our Sultan — God save him — in his thirty-third year, having crushed the rebellion of his admirals, decided to demonstrate his piety by bringing order to all benighted places. Thus the headwaters were choked with barges, and armies bore into the forest deeps. The hillside crops burned, the hillfolk bandits were slaughtered; the hidden valleys echoed with the screams of women and dying mercy-cries in throat-some languages. Finally all the hinterlands were pacified, and the inlanders captured; disarmed; rounded up; assembled together in a great field, where they knelt of their own accord, awestruck and shivering at the sight of the Sultan’s yellow-gold pavilion. So the Sultan turned to his advisors, saying: “O wise councillors, grant me your wisdom, in turn granted by God! What should be done with this rabble?” ~ And the Admiral, with his sickle-spear, said: “Slay them down to the youngest son, no mercy should be shown. Only then can we be sure!” But the Treasurer, with his pen and parchment, said: “There are a thousand families, times seven members on average, times five minutes per execution at the quickest, also accounting for the number of axes dulled, good trees felled to provide stakes, pints of blood that will poison the soil — no, my Sultan! It costs too much!” So the Vizier, whispering into the Sultan’s ear, said: “Exile these people, drive them to the sea/they will drown quickly! “What better fate for squatters, thieves who stole the interior/territories by right your patrimony?” “Oh yes sir, I’ve got a curse for that,” said the Holy Sorcerer. “They’ll never come back, sir, they’ll never set foot on dry earth again. It’s a simple spell.” ~ Therefore the Sultan — God bless him with wisdom — commanded eviction. And the traitors were given the rotting planks of their dissembled hovels, to use as rafts, and they were banished down the river, through the delta, and off and out to the open water. Some, swimming back to shore, found the tide turned against them; the harder they paddled, the farther the coast receded. Soon they tired, unable to fight the Sorcerer’s magical decree. And thus floated — tossed to and fro, a flotilla of sorry creatures, forsaken by both men and God. At first there was a storm. Torrential rain beating the waves down; thunder and flashing; they were soaked to the bone, and to the bones of their boats also. Many drowned. Afterwards they drifted. Becalmed for many days, their sweat dried into salt on their arms — a meagre wealth, salt without rice; they were rich only with hunger, and thirst, and heatstroke; filth and illness. Their shamans called for succour. But their idols were abandoned in the mountains, and too distant to hear. ~ Between them all there were nine coils of cord, and a single hook, previously used to fish in streams — and its owner, sensing his importance, said: “With my hook I will catch food. Hey, if you will owe me your lives, I should be leader!” But the man was mostly a catfisher; his skills did not apply where they were; anyway there were only beads and loose goose-feathers to use as bait. So he caught nothing. And during the night some ruffians came. They stabbed him with splintered stakes; in the morning they said: “We have the fishhook. Therefore: we should be leaders.” “Ho, hear us!” they said. “Our plan: segregation. Families first. Ours. And also: all who we see are strong. The weak: they should be sacrificed. We eat the meat off their limbs. Survival for the fittest!” Naturally, the others were dismayed. “Abomination!” the wise-women said. Together they flung the murderers bodily overboard. ~ [caption id="attachment_4786" align="aligncenter" width="456"] 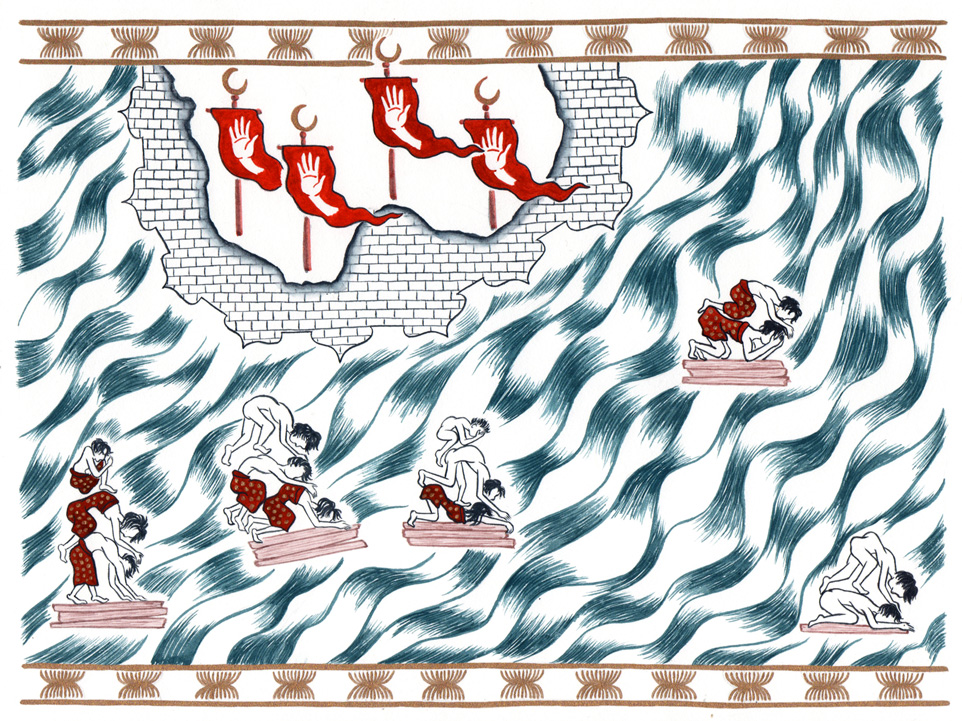 Illustrations by Sharon Chin[/caption] Then they came to an island of pirates. And the pirates — dashing though misguided warriors, their costumes tied with red ribbons, their belts studded with sea-ivory – said: “These souls, fleeing the Sultan’s cruelty, sadly they cannot live with us. To live a life of piratical liberty, one must have sea-worth, able to court and cower before Mother Ocean.” “In their souls they are uplanders. They have hill-shaped hearts. They can neither read star-charts nor savour the taste of spray. They’re simply not made that way!” Having justified themselves, the pirates of the island prepared a care package — a barrel of beer; a netful of fish; twelve blankets, folded, lowered by crane onto the outcasts’ largest raft. Along with a letter, saying: “Ho there travellers! Unfortunately, you may not settle here. Sorry! Have these gifts, no strings attached, with our sympathies, and this whale-bone recorder,” — at which point a flute fell out of the unfolded page — “with which you might use to attract a dragon-spirit’s pity. Hopefully! Thank you. Please go.” ~ Past the island there was another storm, worse than the first. By now their vessels were broken, their drink-barrel empty; fish all gone; their blankets torn apart by fighting. With the lightning, some clambered onto their wives’ backs — and stretching their arms up, ate quick ends by electricity. Others, less lucky, fell into the foam — these were dragged under. Unable to swim, too weak to struggle, they drank their deaths slower. Among those who remained, their last wise-woman was angry at the world and everything in it. Putting the bone flute to her lips, she stood with her back straight; her feet, each on a different log; a single note was what she played: Shrill, clear as a horn, louder than thunderous hammer-sounds. And she sang: “O lords of wind and water, heartless creatures! Torture us no longer! Take our lives, let us die, we offer ourselves! A sacrifice! We do not ask for mercy. Vengeance only!” There was no human reply — but a rumbling answer. An inhuman growl, a surging tremor from under-sea. ~ A sphere burst the surface: the size of a moon; black and smooth — not round, ovoid now, and mounted on a tower the colour of cream. An eyestalk, looking down. And another. And then claws: rising west and east, each pincer-point a mountain, big and blurry with distance. It was he who is called Root-of-Creation — old spirit, eldest of spawn — who’d heard the shaman’s summons. He is father of crabs, and all crabs come from him; he is the largest. Moving in the depths, his great weight makes the sea levels rise, and the tides. The exiles, witness to such a fearful sight, cowered in terror; and even their shaman, the brave, foolish woman — she waited there, expecting to be swallowed. Root-of-Creation held still for a while. The curve of his shell is the breadth of continents; and inasmuch as a country could look thoughtful, he took his time to deliberate. And, having decided, he picked them up, all of them, and he placed them upon his back. ~ Back to the first, to the Sultan’s domains — in the ports, in the cities, there were many whispers: That a great wave was coming; that it had wiped out the pirate-isles; that the far villages were swept away by flying swordfish, and merchant ships by constrictor-eels; that the mermaids were gone, strangled. And bird- and gull-flocks were seen flapping over the palace. They were fleeing. The Treasurer, with his abacus, his feet soaked in salt-water, tallied costs — “A thousand families with no homes, times seven members on average, times two silver pieces per head, bearing in mind the twenty warehouses damaged, the dozen docks destroyed, plus fifteen galleys shattered beyond repair.” The Admiral was not at court; the Vizier’s mansion was found vacant. Both had sought asylum in an enemy state. The Holy Sorcerer, water up to his waist, said: “I’ve got nothing, sir. Have you seen the size of that thing? That’s Root-of-Creation, the crab-god, he’s a top-level creature. Sir, none of my spells are anywhere near his tier.” ~ Therefore our Sultan — may God grant him speed to save his own skin — ordered for the capital to empty. And the citizenry obeyed, going bare-breasted through the flood; on their heads they carried babies, wicker-basketfuls of brass pieces, precious embroidery; they sat on floating bed-frames, paddling with hoes and ladles. But at the city gates traffic slowed and halted, for the palanquins of noble families took priority. So there was a crush, a panicked clamour. O God save us! In the portside districts, those few still left to see saw the surf draw away. By the piers, the long-ships settled at the bottom of the bay, and listed. And behind them, in the distance, inexorably approaching: Grand Mother Ocean, fashioned into a wall, many leagues wide and some leagues tall — Her insides darkened by some shadow, monstrous and crustacean; crowned with froth, topped with wreckage, ridden by rejoicing figures — Those terrible people, those uplanders! All criminals, wretched heathens, spiteful by nature; with feet cursed never to touch earth again — regaining their hillside homelands by drowning them, offering all lands to the sea. They have betrayed us! O God have mercy! [caption id="attachment_4785" align="aligncenter" width="477"] 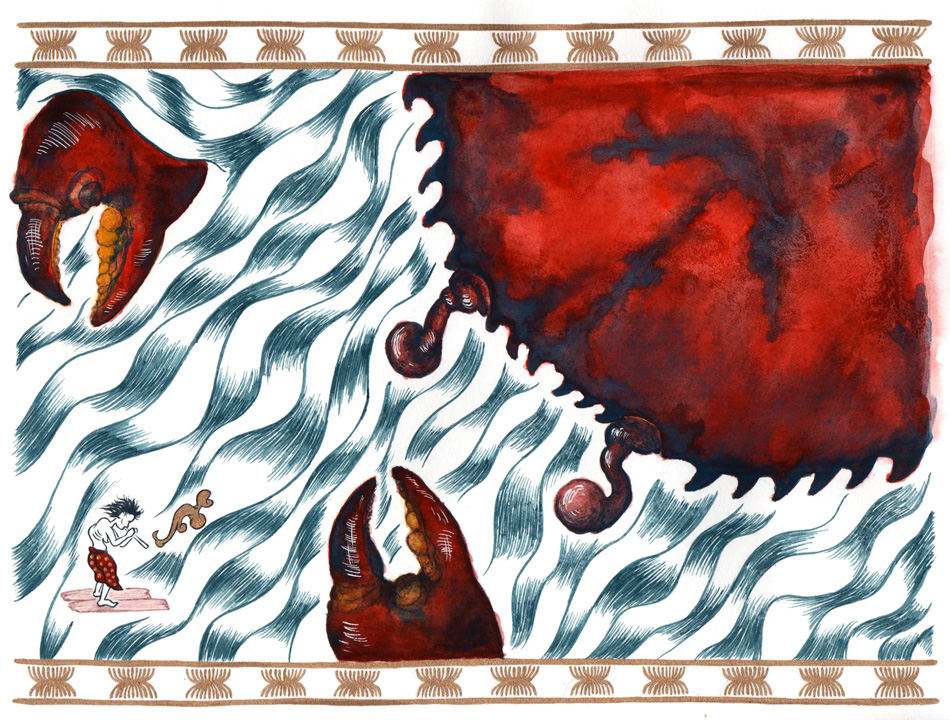 An anthropological study of Zomia – which encompasses the highlands of Indochina, Thailand, Burma, and Southwest China – the book describes how this region’s peoples have resisted the projects of the organised state societies that surround them. “The Pusat tasek, or Navel of the Seas, supposed to be a huge hole in the ocean bottom. In this hole there sits a gigantic crab which twice a day gets out in order to search for food. While he is sitting in the hole the waters of the ocean are unable to pour down into the under world, the whole of the aperture being filled and blocked by the crab’s bulk. The inflowing of the rivers into the sea during these periods are supposed to cause the rising of the tide, while the downpouring of the waters through the great hole when the crab is absent searching for food is supposed to cause the ebb.”
VERMOX
]]>