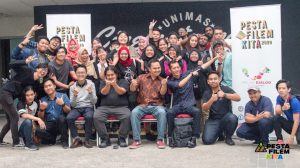 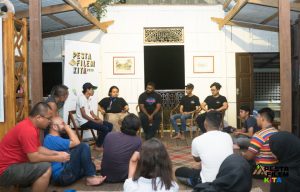 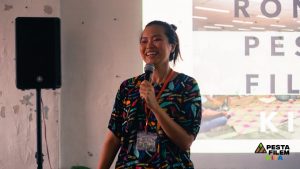 For the past 2 months, Projek Dialog has embarked on a journey all across Malaysia to bring the people thought-provoking & heart-wrenching short films, along with the opportunity to be filmmakers themselves.

Apart of Pesta Filem Kita (PFK), Projek Dialog’s annual Malaysian film festival, the team along with the esteemed filmmakers from previous film festivals set out to hold roadshows in a total of 7 locations all across the country – Sabah, Terengganu, Semenyih, Perak, Sarawak, Puncak Perdana & last but not least, Johor.

The roadshows each kicked off with a small introduction about Projek Dialog & Pesta Filem Kita, hosted by Victoria Cheng, the festival director of PFK. Explaining how this was the festival’s third year running, she highlighted how Projek Dialog has chosen to step foot outside of KL this year, to reach richer stories from the diverse filmmakers all around the country.

Shining light on the unique & beautiful stories made so far, the roadshow continued with a screening of short films produced by the previous grant winners. The films, each encompassing a face of Malaysian society often hidden, pushed the audience to face the country’s daily uglies, truths & clashes. With films such as Si Tommy, Khilaf, Ninavau & many more, the audience experienced how each filmmaker’s vision was brought to life with the help of Projek Dialog.

The filmmakers, each being a grant winner of PFK, were then able to share their stories with people beyond the buzzing KL metropolis. Despite these seemingly ‘small’ towns, the voices that came together beamed loud with excitement and passion as they discussed & shared their common love for films.

Starting with Sabah in early September, these PFK roadshows witnessed a dedication & curiosity like never before.People from all over the country traveled far and wide to attend these roadshows, some travelling as far from Kuala Lumpur to Terengganu – a tiring but rewarding 4 hour drive.

Some were filmmakers, others film enthusiast, some were just curious, but all who came had a common understanding – that film, as a cultural medium, was one that could speak wonders.

A brief about PFK would follow shortly after, as the festival curator, Muzzamer Rahman, would take the floor. Muzzamer would go on to explain the application conditions & criterias.

There were a few application conditions, such as – only Malaysians age 15 to 35 were eligible to apply, the film duration would have to be 5 to 15 minutes long, etc. Moreover, all submissions had to follow the themes set for the year – Wawason 2020, Minority Voices in Malaysia Baru, Daily Life in Malaysia, Art & Tradition, Cultural/Religious Diversity & Cross-cultural/religious subjects.

Winners of the grants, from West Malaysia and East Malaysia, would be awarded RM 10,000 and RM 13,000 respectively.

As he  spoke to the potential filmmakers in the room, whether it be experienced or amateur filmmakers or simply just Malaysians with ideas, he made clear that PFK was an opportunity to have their story be heard.

Reaching out to Malaysians from different states, cities & towns, the ideas swarming the room were all rooted in a truth that was unique to each individual.

The audience in the room would then get to ask the questions buzzing in their minds, such as questions about PFK, the films or the filmmakers themselves. Hands shot up as the filmmakers & festival curators sat in front of the crowd, ready to answer the audience’s many questions.

Each film brought out a different set of questions from the audience. Whether it be about the plight of the stateless, the act of a Malay boy feeding a dog or child marriages, the audience brought to light their concern for issues of each film, as well as their admiration for each director’s impact of storytelling. There were also thoughts & opinions shared on their perception of the film as audience took the floor to express how they felt along with their critiques of each film, all which the filmmakers accepted with open hearts.

A variety of questions were asked at each roadshow. More than just about the films, there were questions about a filmmaker’s responsibility to their own truth, the answers they hope to provide to society’s qualms, what first steps an aspiring filmmaker can take and many more.

Many continued to go on to speak to the filmmakers & team personally as they shared their views & probed further into the filmmaking experience. Whether it be over a cup of Teh-Ais or outside the classroom door, the conversations between all participants & filmmakers seemed to leave a lasting impact on the audience. Ultimately, each member of the audience was able to leave with a deeper & more diverse perspective of the cultural medium that is film & the power it holds.

As one by one, the audience left the room, they each left with wide smiles, telling us “see you soon!”.

Pesta Filem Kita 3 is approaching (only 5 months away!) & this time, it’ll be sure to draw a crowd like never before. 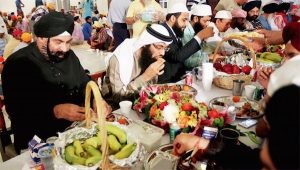